Links To Think About

Error: Twitter did not respond. Please wait a few minutes and refresh this page.

Woke up at 4am today and headed into the dining hall to read my bible and “What In The World Is Going On?” by Dr. David Jeremiah. Feeling somewhat lonely without Angie & Zach around, even though I’m surrounded by good people. Had a good breakfast of scrambled eggs & sausage, then a good prayer time that set a nice tone for the day. 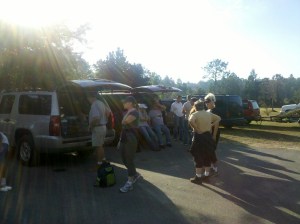 I was assigned to Peter’s work crew, along with Ryan, Stefani, Shelley, Deb and Naomi. We headed over to Paul’s house, where his grandfather, Joseph filled us in on what he wanted us to achieve this week. Joseph was a career ship builder, a WWII veteran and one of those guys that made America great in the middle of the 20th century. It’s too bad this country is so lacking in people like Joseph these days.

Ryan and I were charged with fixing part of the roof line, where water had damaged the joists. Ryan ended up doing most of the work and had the plan to fix the roof, so I spent a lot of time standing around feeling useless. It was hot, muggy and very uncomfortable. I missed a lot of Joseph’s walk-thru information and felt like I was a step behind the overall plan all morning, which led to some frustration on my part. This opened the door for the evil one to start planting doubts and by lunch time I was wishing I hadn’t come on the trip. I finally decided to stop being down and just trust in God and at the very moment I made that decision, a cool breeze blew over the property and cooled me off a bit. That sent shivers down my spine, like God just blew some cool air in to show me He was there.

After lunch I was able to put some window sills into the girls bedrooms, but wasn’t sure about them since we didn’t have enough wood to make them exactly like the sills in the front room. But, I’d finally accomplished something, which was enough for me to hold onto and trust that God had me here for a reason.

The evil one kept trying to drag me under though. As the day went on I missed Angie and Zach more and more and really just wanted the week to be over. Honestly, if I could have snapped my fingers and been home, I probably would have done just that.

During our devotional time after dinner I felt like I was the only one to speak negatively about the day, which added even more to my second-guessing. I didn’t want to drag the group down, but felt like I was. However, God is good, all the time. It’s His will for me to be here, so I’m going to do my best to do my best for Him. Tomorrow is a new day and no one ever said Monday’s were great. 😉

View all posts by Mr. Mike