Links To Think About

Error: Twitter did not respond. Please wait a few minutes and refresh this page.

Woke up around 4:00 am and headed down to the hotel lobby. Three teenage girls were hanging out in the lobby, cussing, talking about having sex and basically illustrating how totally lost they were. I prayed God would help them, and considered talking to them, but figured they wouldn’t listen to a old guy like me. It was pretty obvious they needed a good female role model in their lives and God willing, they’ll get one before they cause too much damage to themselves.

We left around 6:00am and had a good drive the rest of the way to Biloxi. Got to ride with Tom, Sue, Carl and Ryan at various points and learned more about them. What great people God has put on this team! We drove through Hattiesburg, home of Brett Favre. Stopped at a gas station in Hattiesburg and Carl struck up a conversation with a fellow whose wife had just been baptized. That was pretty neat to see the gleam in his eyes as he talked about it. Love how Carl can just walk up to anyone and start talking about God in a way that’s not offensive, weird or off-putting. He really has a gift for evangelism and it was great to see it in action. God is good, all the time.

We pulled into the volunteer camp at Biloxi Christian around 5:15pm. Ken Wetzell and Sharon from S.T.E.M. were there to greet us. We had a quick orientation in the sanctuary, a great room with a very awesome feel to it. You can tell lots of prayers have gone heavenward from this sanctuary. 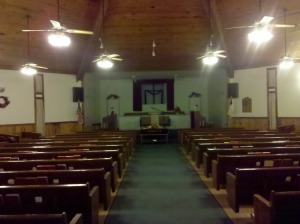 Ken shared some stories and really made us feel like we were part of something much bigger than I’d imagined. They prayed, God whispered, we came. How awesome that the God of all creation would want us to do something for Him!

We unloaded the vehicles into the cabins which were old storage trailers converted for use as voluteer cabins.

Afterward, we went out for dinner at a local Italian buffet. Never seen an Italian buffet before, but it was very good. Lots of laughs and good food. Breaking bread with this group is an honor, as God handpicked each one of them for this trip, which reminds me that he handpicked me too. I miss Angie and Zach greatly, but I’m trying to focus on the task at hand, on my teammates and most importantly on God.

View all posts by Mr. Mike